Jody Seay was born a Texan and is the granddaughter of a cattle rancher. She is also an award-winning author, television show host, speaker, musical playwright, and Jody has been an Advanced Certified Rolfer since 1980.

This has been a big year for Jody, not only has her new book, ALMOST A MURDER, come out, she has been selected for induction into the Texas Radio Hall of Fame for her work at KZEW-FM in Dallas in the 1970s. Go Jody!

Jody’s first book, THE SECOND COMING OF CURLY RED, (1999) is now in its second printing (2014). Jody won First Prize for Fiction at the Mendocino Coast Writer’s Conference and then went on to become a Finalist in the prestigious Oregon Book Awards.

“Almost 20 years later her story could have been torn out of today’s newspaper headlines: a senseless killing spree, fire and brimstone hate crimes against gays, and the transformative power of loving relationships. She portrays a high-spirited, heartfelt and hopeful journey that is also filled with loss, pain, and grief.”

Jody’s second book, DEAD IN A DITCH: Growing Up In Texas & Other Near-Death Experiences, is a hilarious, honest and heartfelt memoir about her childhood and her mother’s ongoing fear that one or all her rambunctious children would die on her watch.

Mother always worried “not just that we would die, but that we would be found ‘dead in a ditch’. It was the ditch part that always made it seem so much worse. ‘Where have you been?’ she would say worried sick. “I thought you were dead in a ditch.’ This was Mother’s mantra.”

In Dead In a Ditch, Jody introduces us to a little girl who took every double-dog-dare trying to prove her bravery and immerses readers into the wackiness of growing up in a loud and rowdy Texas brood, what it meant to come out as a lesbian in a conservative family, and witnessing the courage it takes to live an authentic life.

Between books, Jody wrote a musical, which was produced by the geniuses at BroadArts Theater in Portland, Oregon. BUNKN’ WITH YOU IN THE AFTERLIFE is a rowdy romp filled with laughter, tears, and inspiration. It addresses love, loss, redemption, and spiritual awakening. This ecumenical, lesbian cowgirl, musical has traveled quite a dusty trail to end up where it is today. From a thought to a song, to a full-blown musical comedy; it is now on its way to becoming Jody’s fourth novel.

As co-producer and TV host of the 30 minute show, BACK PAGE, Jody interviewed Pacific Northwest writers about the ‘story behind the story’: what compels a writer, the nuts-and-bolts of getting published, and the intimate relationship between author and audience. BACK PAGE was distributed by Oregon Public Broadcasting and other regional networks. Three hundred shows spanning 10 years demonstrate Jody’s contribution to writers and to the greater community. Jody has lived and honored her belief that everybody has a story to tell. 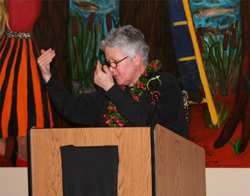 Ms. Seay is often on the road to read and speak at book clubs, libraries and bookstores. Public speaking has become a big part of her life in recent years. She can talk to anyone at anytime. She is from Texas after all! Jody has been the keynote speaker at writer’s conferences and political fundraisers and lectured at the University of Oklahoma (Tulsa Campus) and at Portland State University.

Seay’s numerous essays and short stories have appeared in newspapers and magazines across the country; her Facebook page, website and blog are entertaining and heartwarming. She looks at the world from a unique boots-on-the-ground perspective.

One last word from Jody:  “I am a Texan who never enjoyed sweating, so I moved from Dallas to Portland. Both places continue to be good to me. I aim to make them both proud.” And she does.